After being Very Serious with Ruskin, I thought I may as well turn to some lighter topics. So, I chose The Absinthe Drinker by Arthur Symons. Symons was a fairly well-off poet, editor and critic of the Victorian age till his death in the twenties or thirties. He wrote several plays, some good and some not so good poems, critiqued a lot of people, and (all the better for him) was part of the Decadent movement. This poem is not one of my favourites, though I do love two others of his (Stella Maris and In An Omnibus), but they are far more serious than this poem. This poem, as the title implies, is about drinking absinthe; it was written when Symons went to Paris with a friend and they tried absinthe for the first time (read: they got blind drunk on absinthe). Apparently, neither of them drank it ever again. 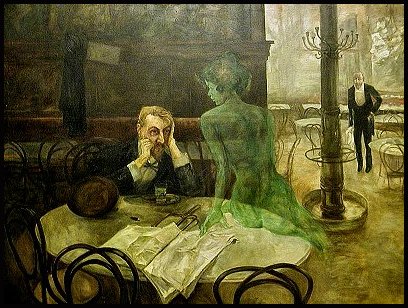 So, this is not a major and serious work; it is light-hearted in a way, but I think it is better than merely ramblings of a drunkard. It is well-done, interesting, and, amusingly, rather relatable (well, for me. Possibly for the Dear Reader as well). The poem. The first half of the sonnet first, as the Mad Hatter (or is it the March Hare?) says. I enjoy the opening line ‘Gently, I wave the visible world away.’ It draws one in with the simple, easy feeling of relaxation, and (to me, at least) brings up a feeling that one is succumbing – whether to the poem or absinthe. From this line, it develops well enough; I enjoy the description of voices far off, and the uncertainty, at first, if it is even the author’s voice. The repetition is nice, ‘far off… far off and strange’ reinforcing the author’s detachment from reality, and follows up the first line nicely. This same theme one sees in the rest of the first half; the description of reality’s new, dreamlike appearance is, itself, almost dreamlike, and lures the reader in with its fantasy world, where even the ‘dim sunshine is a dream.’ The dreamlike, vague reality is contrasted well with how clear the passers-by are, although the way they appear as ‘the world to lovers’ eyes’ brings back the strangeness of the trance.

I love the second half. No, it isn’t the best end of a sonnet you will see, but it works well. The weird reality remains, and I love how ‘the hours are all linked/ in a dance of forgetfulness.’ Perhaps overdone, but I enjoy it nevertheless. The rest of the six lines are quite good, describing well how time slips away from the author, as he enjoys his absinthe. It couples well with the first half, and brings up once more the weird, dreaming reality of the author, as he drinks his absinthe; how he discounts time, he is at peace, relaxed, forgetful of all that is not immediate, ‘rocked on this dreamy and indifferent tide.’

It isn’t an amazing poem, and Symons was not an amazing poet. However, this poem is enjoyable, and functionally well done. The blurring of reality is depicted well, and definitely makes the reader understand the author’s bizarre experience – perhaps the Dear Reader is even able to reminisce about similar experiences? Sections of it, I must admit, sound familiar. Yet it is more than just feeling drunk; the poem is about the Green Fairy, as in the above picture. In the 1800s, it was She who tormented, taunted, and haunted the absinthe drinkers, pulling them into madness. From that point, the poem also is strong. One is even vaguely tempted to read into the last line, ‘scarce I feel your soft caress/ rocked on this dreamy and indifferent tide’ as an account of the Green Fairy caressing the man. I don’t ascribe to it, as I think it is taking it too far, but it is a possibility, and is interesting. So, there you have it: The Absinthe Drinker, a decent poem, not brilliant, but a lighter-hearted  follow up to the Past’s heavy reads!

One thought on “The Absinthe Drinker”

People Who Cared to Talk